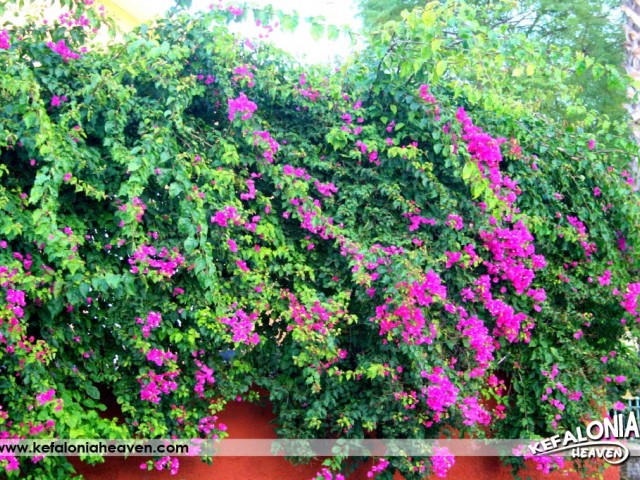 Kourkoumetala is one of the most beautiful, superb, picturesque and impressive villages of Kefalonia, even though characterizing it as the most beautiful village in the entire island wouldn’t be an exaggeration! One visit is enough for someone to easily verify this title! It is located 10klm. from the island’s capital, Argostoli, and is a part of the Municipal Department of Livathos. It is a village which is considered to be the capital of this particular area, as it’s located in its heart and differs from the others because of its beautiful view and its excellent infrastructure.

Kourkoumelata has been inhabited since the end of the 15th century and its name originated from the surname “Kourkoumelis”, as the “Kourkoumelides” are said to be the first village residents.

Kourkoumelata can be considered as “Kefalonia’s Ekali”! But as opposed to the impassable of the northern suburbs, one can gaze at the houses’ beauty in this village! It has beautiful buildings, well preserved and well-attended to. One particular characteristic of the village is the variety in the construction design of the houses, which aren’t in the road but instead follow rules of excellent infrastructure. But despite the beauty and tastefulness of the buildings, it’s not the buildings that play the lead role in Kourkoumelata, but the colorful gardens, which are an integral part of the area and are tended to by the villagers with great care. Even the public spaces are impressive, with grass being everywhere and with gigantic palm trees lingering over the central square.

There is a park, a square, a hotel, a building where the Philharmonic of Livathos is based, a majestic, traditional style church, a shrine, athletic facilities and a stadium in the village. Next to the stadium is a big concert hall, a fascinating structure of neoclassical architectural design, which functions as a spiritual-educational-cultural centre. It is a Display Centre of Kefalonian works of art, with parallel activities for informing and educating the audience on issues concerned with our traditional art. An exceptional example to be followed! In the 118th edition of the 1st issue of the Government’s Newspaper (29th April 1977) a Presidential Decree was published about “the approval for composing the Georgios and Mari Vergotis Public Benefit Foundation”. Mrs. Mari, wife of Georgios Vergotis, bestowed the “Educational Centre” to the recommended foundation to be used as a Centre and Byzantine and Post-Byzantine Art Museum, with spiritual activities, exhibitions, lectures etc. Cultural events are held there nowadays, helping promote our island’s cultural world and more, thus attributing to Kourkoumelata the impression of its being a progressive Kefalonian village.

The view of the airport and the surrounding areas is mesmerizing, especially during sunset. One can admire it while enjoying his coffee at the local café or from the park with which it borders. We could say that it is a model village that many would like to copy!

The village is one of the island’s sights and there are excursions by coach to Kourkoumelata with visitors from all over the world all year round. It’s worth visiting, as the elaborate buildings, modern road planning, superb polyanthus gardens, flowerbeds, plants, tropical trees, clean roads and spectacular view compose an idyllic environment. Rightfully is Kourkoumelata considered as “the most beautiful village in the Balkans”!