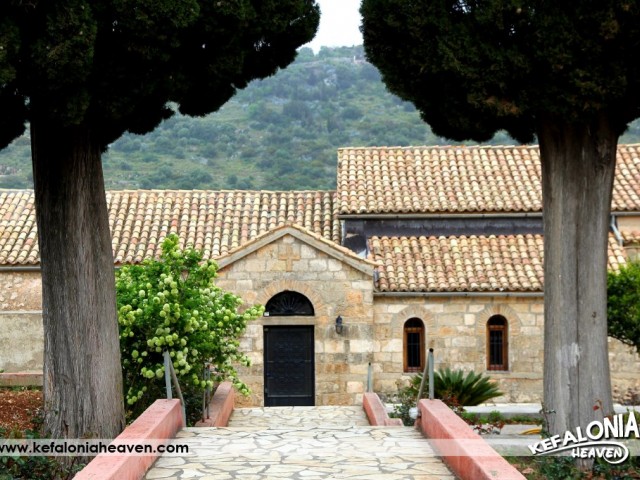 The monastery was founded in the Byzantine Era. It is mentioned as a Monastery in the Kefalonian Latin Diocese’s Records since 1264. It is deserted in the centuries that follow and is re-established in the year 1579, when three spiritual sisters, Venedikti, Leontia and Magdalini, all three of them from the first capital of Argostoli, the Medieval Municipality of the Castle, bought the property on which there already was the small, deserted monastery in the name of Apostle Andreas and settled there so as to cloister.

A female commune quickly develops. In 1639, the Greek-Romanian Princess Roxanne, daughter of the First Sword Holder of Moldovlachia, Zotou Tsigara, and granddaughter of the Ruler of Moldovlachia Petros Voevodas, came to cloister here in a miraculous way (she was saved from a shipwreck) and her name was changed to Sister Romilia. Besides her vast fortune, both in money and in property, she also dedicates a priceless spiritual treasure from Agio Oros to the Monastery: the sacred relic of the left foot of Apostle Andreas. The foot, which has been dislocated from the ankle, has on it the flesh of the Saint and his dried blood. The hole from the Saint’s crucifixion nail can be clearly seen. Also, its fragrance is characteristic and quite strong. Since then, the Monastery has been endlessly functioning as a Female Communal.

One can also visit the Ecclesiastical Museum at the Monastery, which was established in 1988 under the care of the Bishop Spiridon and is housed in the Monastery’s old church, which is the only one saved from the catastrophic earthquakes of 1953. In the first room are murals which have been removed from the walls of the Sacred Church of the Monastery of the Archangels of Milapidia. Some of the exhibits in the room are the shroud of the National Martyr Patriarch of Constantinople Grigorios V, the epitrachelion of Saint Nektarios and the undershirt of Saint Panagis (Father Basias).

The space of the main church is preserved intact in its original form. The chancel is a 17th century piece with notable icons. The chancel’s parapets, with themes from the Passion of the Christ, are works of the priest Theodoros Poulakis, whereas the sanctuary gates depicting the Three Hierarchs are works of the hierodeacon Athanasios Anninos. The murals were covered with lime up until the earthquakes of 1953 because the Monastery was forced to stop functioning temporarily in 1832 by the British, in order to establish a Protestant school within the Church. After the restoration of the building, the murals were cleaned and preserved. Heirlooms of the Monastery and icons belonging to the Holy Archdiocese of Kefalonia are exhibited in the north vestibule. Among them the picture of the couple Tsigara’s portraits and that of their daughter nun Romilia is of great importance. In adjoining show-case five of her needleworks of fine art, masterpieces of golden needlework , are saved. In another show-case the pastoral stick and the Holly rod of the Archbishop of Kefalonia Nikodemos B’ Metaxa, a very significant personality of the 17th century, who established the first printing-press in Greece, in Constantinople.

Two manuscript letters of Saint Kosmas Aitolos dated 1777 are exhibited in the Museum too. One of the most important exhibits of the Museum is Kefalonia’s Archebishop’s sack, knitted by the nun Theodora Kanali originating from the village Metaxata in the period 1715-1721 with references to Jesus Christ as “vine” in the front and the Virgin Mary as “the genealogic tree of Iesai” at the back.

The Monastery celebrates twice per year:30th November in memory of Apostle Andreas and on Friday Easter in memory of the Zoodochos Pigi who is the Second patron of the Monastery. After the Arc hieratic Mass follows a honorary procession of Apostle Andreas’s relics and the miraculous icon of the Mother of God - Zoothodos Pigi (1560) as well as the icon of the finding of “Virgin of Milapidiotissa” (11th century) and other miraculous Divine relics of the Monastery, up to the chapel of Saint Nikolaos Skardabeli and then dinner is offered to the faithful prepared with the care and love of the nuns.

A small feast takes place on 15th August (The Assumption of the Virgin) with the participation of the Cypriots worshipers . that day, before the neatness and nice epitaph of the Mother of God chanted the solemn eulogies for the Metastasis of the Mother of God and a procession of th original epitaph decorated with fragrant flowers follows.

So, “mikropanigiris” (small religious festivities) in memory of the Saints take place. In the Monastery the all night services according to the Agioritiko Ritual take place unfailingly. Every Sunday there is the Holly Mass as it happens in the big celebrations and very often they have vigils. The nuns occupy themselves with textiles, tailoring the priests’ vestments, iconography, crafts and hospitality, as well as the agricultural cultivations and the gardens. The Monastery has also a laboratory for the maintenance of portable icons. For many years the Monastery, despite the difficulties, has developed a rich charity and missionary action. Jesus’ love and politeness is mirrored in the faces of the brotherhood and it exudes perfume of orthodox spirituality and at the same time it constitutes an attraction for each struggling Christian.