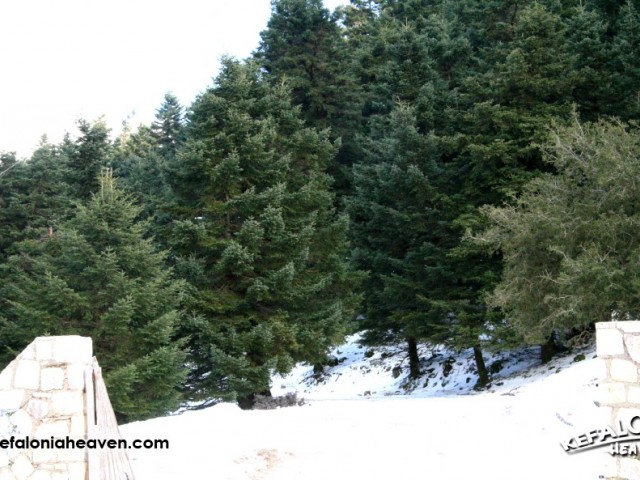 Apart from native species of particular scientific interest, Enos offers a combination of mountainous and seaside landscapes. Under good weather conditions, almost the entire island coastline is visible, as well as the mountain ranges of west continental Greece and part of the Ionian Sea. It is a place visited by residents from the entire island, all year round, a great summer getaway and a place of spiritual exaltation, admiration and recollection.

The abundant and rare wild flora and fauna, as well as the characteristic geomorphic formations, habitats and landscapes give special value to the National Park. The Ministry of Environment, Country Planning and Public Projects, appreciating its immense significance to the sustainable viable development of the environment and the general upgrading of the island, has acceded to starting a promotion and protection program. The Ministry had also signed to programmatic agreement for the conducting of research for the development and promotion of Enos with the Municipality of Argostoli and the Inter-municipal Environmental Cleaning and Protection of Kefalonia project on 25/01/99. In accordance to country planning and adjustment of production activities, a Presidential Decree is expected for the modification and expansion of the center of the National Park up to 315 acres and for the establishment of peripheral zone borderlines, which will enclose a total area of 47.230 acres.

Enos National Park is consisted of the main mountainous mass of Enos and the top of Mount Rudi at the northwest, with an altitude of 1125 meters and independent boundaries. The heart of the park has a total area of 2862 hectares or 28620 acres (the smallest in Greece). Its highest tip is Megas Soros (1628m.); there are also other tips such as Kalon Oros and Merovigli. The northeastern side of Enos is completely anhydrous, barren and uninhabited. Due to its limestone formation, the rain is absorbed by the soil and is directed to the lower levels at the foot of the mountain, where water abundance and farm cultures are main features. This, along with the humidity coming from the sea, sets the special conditions for a peculiar vegetation and, hence, ecosystem.

Enos’ climate is mainly Mediterranean and changes according to the season. During the summer months, it’s hot and dry during the day, but at night the temperature evidently drops. During spring and autumn, frequent rainfalls are the main characteristic, while it is covered with snow during the winter, especially in January. The past few years the climate has been changing towards being a bit cooler.

Up until the 16th century, the forest covered the mountainsides, going as far down as the foot of the mountain, but excessive lumbering over the last four centuries (mainly by the Venetians), the fire which broke out in 1797 and the catastrophic earthquake of 1867 resulted in it being reduced to 2/3 of its initial expanse. It was declared a National Park in 1962 (FEK 199/A/1962), with the main purpose being the protection of the “black” Kefalonian fir tree from hybridizations. This fir tree is a native and the main forest species of the park; in 1824, sperm from the tree was sent to England by the British Commander of the island, Charles Napier, and in 1838, Loudon named it Abies Cephalonica. The other purpose of the park’s establishment was the protection of the forest which covers an area of 19.730 acres today in the upper sections of the mountainsides of Enos (the main mountainous area of the park). The firs grow at an altitude of over 800m, reaching a height of 20- 30 meters; their trunk is upright, with many side branches and glossy dark green, almost black leaves; the leaves’ layout is spiral and they live up to 500 years. Hybridizations of the species are found in southern and central Greece. There are different kinds of broadleaved species in the fir forest, with a bush-like form (typical form of macia vegetation of the Mediterranean region) and bushes like gortsies (Pirus amygdaliformis), hawthorns (Craetagus), yews and brushwoods ( thyme, kanoukles, sunflowers) with the perennial Euphorbia biglandulosa being the most dominant . The brushwood Phlomis fruticosa is also quite prominent. On a higher altitude in the rocky regions there are thorny brushwoods like Astragalus Cephalonicus and Astragalus angustifolius, while on lower levels Leontodon graecum, types of centaurea, crepis rubra, silene ionica, silene ungeri etc. are found. Native species such as Viola cephalonica, aubreita deltoida, saponaria of Enos, the Kefalonia Skoutellaria, agiouga of Enos and Kefalonian moss characterize the uniqueness of the park’s flora. What’s more, there are other rare plants such as: the Arenaria ruicciardi, the Erysimum cephalonicum, the scaligeria moreana, the alkanna corcyrensis, the crocus hadriaticus and the rare pink peony.

On Mount Rudi well-developed bush of types of arbutus, yew, holm, folic, chrisoxilo,
lentisks and others, which are tangled up with perennial climbing plants such as different types of honeysuckle, ivy, smilakas and others and cover an area of 6.460 acres.
The forest constitutes a deep green mass and is a wildlife heart, which is threatened by fires, herding and even the lack of young plants (aging of the fir tree forest).

The park’s fauna consists of a few mammals such as foxes (Vupes vupes), ferrets (Martes foina), hares (Lepus europaus), porcupines, weasels, badgers, moles and others. The Enos horses (Equus cabalus) are descendants of the mountainous type ancient Greek ones, as they originate from the Pindos species. In the past, they were used by the locals in farming and they were set free after World War II.
Due to free breeding in natural conditions and through processes of natural selection, they evolved into a pure species, constituting a very important genetic material used as an antidote for the degeneration of the Pindos horses. They managed to survive the wilderness in small herds. Nowadays, there are a few dozen left, which live on the rocky southeastern hills of Enos, at an altitude of 1.300- 1.500 meters. The Zoodochos Pigi Monastery is located in this area and is the only water source, which is visited by the horses to quench their thirst. Their main feature is their short height, slim head, strong legs and rich mane and tail. They’re quite smaller than the Pindos horses but maintain the same colour. What is extremely impressive is their similarity to the horse forms seen on ancient sculptures.

As far as reptiles are concerned, the most interesting is a small lizard, the Algyroides moreticus which is native to the Peloponnese and the Ionian Islands.

There are also 26 species of birdlife such as the partridge (Alectoris graeca), the predator snake eagle (Circaetus gallicus), the sparrow hawk, mouse-hawk, the kestrel and various other migrating birds. Vultures are rarely seen and there are also partridges. Recently, the black woodpecker (Drycopus martius) was discovered, a kind of woodpecker that isn’t found on any other island in the Mediterranean. Many species of passerines are quite dominant, such as blackbirds, florias, goldfinches, larks, crows and hawks.

The Venetians named Enos “Black Mountain” (Monte Nero) upon seeing the dark mass of fir tree covered mountain, while there are still locals who up to this day call it Megalo Vouno (Big Mountain). This is probably connected to the symbolization of the mountain due to its mass and its cloud-hidden highest top which has been proven to have been a place of worship of the Enisios Zeus. Remains of the temple were found on the top, Megas Soros, and prove its exploitation by humans in ancient times. Enos was part of Odysseus’ kingdom and supplied it with the necessary timber for the construction of boats. The Zoodoxos Pigi chapel, located in its namesake spot, as aforementioned, is the place visited by the horses because of the spring found there.

The “Metaxa building” (at an altitude of 1.200 m. and within the park), was built during the time of the dictatorship of Ioannis Metaxas (1936- 1940) as a sanatorium and a mountain retreat. It was deserted when the war broke out, before it even started functioning and was later damaged by the 1953 earthquakes. The building which has references to Italian architecture was deemed as a landmark in 1999 and, since October 2004, construction and upgrading works have been undertaken. According to the restoration proposal, the structure is being enhanced structurally and renovated so as to function as an information center and a mountain retreat for the coverage of the functional needs for the National Park’s promotion.

Enos National Park was established in 1962 (ΦΕΚ 199/Α/1962), (National Parks consist of expanses, most of which have forests as their main feature and display particular ecological and scientific interest).

It has also been declared as one of the 151 Special Protection Zones of birdlife in Greece, according to Council Directive79/409/ΕΟΚ.
Also, according to another Council Directive, it has been characterized as a Special Preservation Zone, due to the presence of fissures of limestone rock at an altitude of 1.000- 1.500 meters, as well as the presence of a large variety of orchids and screes.